What drives the sexual behaviours and attitudes of Roman men?

Roman male sexual language tends to be both direct and violent. We can look to Ovid’s discussion of sexuality in the Art of Love. There, the female is waiting and wanting to be seduced. All women are to be seduced either by words, deeds or, ultimately, money. The thrill of illicit sexual activity is shared. But there is also an expressed tolerance of male sexual violence towards women.

There is undoubtedly ironic commentary on contemporary Augustan politics and the way in which the regime placed social and sexual disciplines at the forefront of their moral reforms. It would be a foolish reader who took anything written by Ovid at face value, but his depiction of sexuality would seem to represent a view in Roman society, which tended to equate sexual domination with power and status.

The Ovidian text wrote that sexual domination into the very origins of Rome, when Romulus provided wives for his new citizens through the abduction and rape of the Sabine women.

The scene is a favourite for modern artists. Picasso painted it twice, for instance. The abiding interest in the story is probably prurient: what better way was there to feel morally superior, but also to engage in the crime. Yet, there is also a sense of contrast. Rome was the story of civilization. Does the Sabine story somehow inculcate Roman civilization with sexual violence?

The gods were famously sexually promiscuous. The male gods were serial rapists. Literature and art represented those sexual acts.

One might argue that in pointing out this link, Ovid is precisely pointing to the problematic sexual politics of Rome. Augustus brought in laws limiting sexual contact. But that further politicised sex. 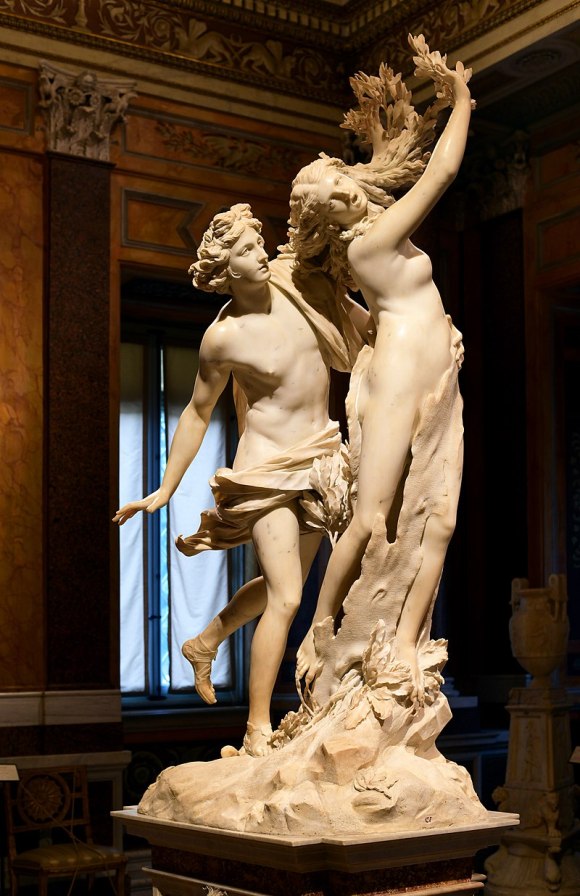 Bernini, Apollo and Daphne. The god’s rape of Daphne is frustrated by her transformation into a tree (Commons)

Even if we imagine that Ovid himself had a sophisticated and humane understanding of sexual violence, the stories hardly work if an aggressive make sexual violence was not a feature of Roman society.

For Roman men, sex and power were inextricably linked. We can read Pliny’s letter to his wife or his poem to his freedman and ask the very simple question of who has what power? Can either of his sexual partners say ‘no’?

I emphasise that we cannot ever know what went on the in bedrooms of the Romans and there must always have been loving and consensual arrangements, but the texts represent an infusion of power into sexual dynamics.

Romans were more prone to mock men who desired other men and men who loved boys might be treated with some measure of contempt. Greek toleration of same sex desire was less clear in Roman society and homosexual activity could be the target of political invective. Yet, there seems to be no question that males could desire young boys and could act on those desires, especially of the boys were not free born.

The other issue with homosexual behaviour related to political behaviours. If a high status man offered himself to another man of similar status, was he seeking political favour? Were the favours given to young men especially, had they been secured by the youths prostituting themselves?

The male objects of desire tended to be very young. When males loved their slaves, those slaves tended to be boys not men. It seems apparent that such desires might carry on into adulthood, without significant loss of social status to the senior male.

What happens when sex becomes about power and status rather than about love and pleasure? What happens if sex comes to be about honour and a performance in which status is played out?

There are stories about Augustus: that he made Terentia and Livia appear nude before so that he could judge their relative beauty (Dio, 54.19; Suetonius, Augustus 69). Suetonius includes stories of Augustus having Roman matrons and unmarried girls paraded naked before him. Suetonius, Tiberius 43-45 has stories about Tiberius procuring children and young women, stories which are horrific. There are stories of Gaius and sexual violence. The sex life of Nero has inspired horrified moralists to reimagine it in every detail.

Of course, such stories cannot be supported by documentary evidence and they offended and were meant to offend. But they also suggest that the most powerful men could make demands and that refusal was caught up in issues of status.

They also point to limitations of a Roman sense of morality. If we think of an ethical attitude as being a respect for the feelings and value of another, then ethical sexual behaviour would mean respecting one’s sexual partner and their rights over their person. Sexual acts would be mutual and consensual.

But the acts associated with the emperors were clearly seen as manifestations of their social power. That power allowed them to use the bodies of others for their pleasures without regard to the feelings or values of their sexual partners. The texts are talking about sexual perversions. But they are also talking about social perversion.

The conventional way of approaches these stories is to think about their truth value. But that is the least interesting question, in part because we can never know. What is more interesting is that people believed and retold these stories. What made them credible?

Let us assume that most Roman authors and their audiences had no more idea than we do whether such stories were true. Their credibility cannot rest on facts, but on whether they were judged to be the sorts of things men like this might do. Evil, powerful men for whom conventional morality had no value might be thought to act in this way.

The sexual perversions then reflected the over-concentration of power on the person of the emperor. They had the power to do these things and people imagined that they did. Absolute power might manifest itself in sexual forms.

Of course, emperors shared those attitudes. Might they have imagined that their power just allowed them to behave in contravention of normal moral practices?

When power is so closely associated with sex, do sexual ethics simply cease to have a hold on the individual?

Sexuality and Power in the Family

The interrelationship of power and sex in Roman masculinity is so prevalent and, we might think, so toxic, that it underpins and connects to all other aspects of personal relationships. It is difficult not to connect it to the power of the pater in the Roman family. This brought power over slaves and must have affected the treatment of women.

The family was a core element of Roman social life. One might think that the first duty of a Roman male was to his family. Legal and financial power was concentrated on the pater. We might imagine that these legal and economic forms transmuted into other forms of power. A pater might physically discipline slaves and children. A pater  had sexual access to his slaves. It takes little imagination to think that a link was made between the social and sexual power of the pater.

It is in these circumstances that we start to understand the deeper dynamics around the attacks on Claudius for being a fool for his wives. If the women could use sex to manipulate, then they held the power. If women held the power, then the fundamentals of the Roman household were perverted. Wives holding power over the emperor was no better than the freedmen holding power over the emperor.

This is a really difficult question, but there is some evidence for an erosion of those old patriarchal values and for the emergence of a new conjugality. Women (Agrippina; Livia) do seem to have been partners in households, taking powerful and responsible roles. Seneca wrote respectfully of the women in his household. Pliny offers us flattering portrayals of women such as Arria, who killed herself when her husband was to be condemned for treason. Her connection with Caecina Paetus, her husband, was loving and monogamous.

There is plenty of evidence for good conjugal relationships and some measures of equality and affection. Christian sexual morality emerged from this context in the first and second centuries and had a very different attitude towards sexual behaviours.

This is a difficult area of social life to think about and understand. It is probably safe to assume that there were considerable ranges of behaviours of attitudes, as we find in modern societies. But there seems little doubt that Roman sexual morality was both more caught up in power relations and far less liberal and consensual than our modern norms.