Home » Nero » The Politics of Immorality

The Politics of Immorality

It is hard to escape morality when discussing Nero. 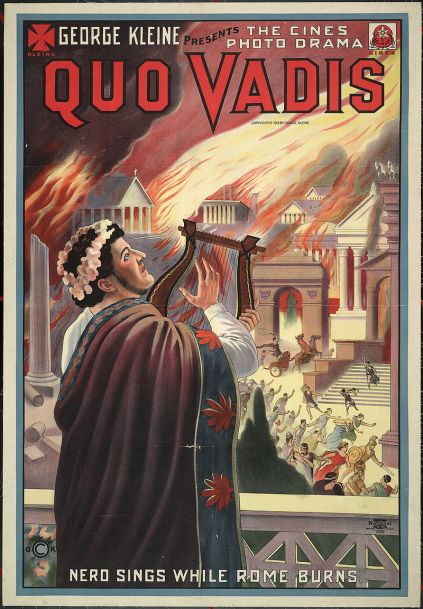 There is certainly evidence that the young emperor exploited his position in disorderly ways. Easrly in the reign,  Julius Montanus, his wife, and a group of his slaves or friends met a gang of youths in the street. They took liberties with his wife and Montanus retaliated. Nero ended up with a black-eye and stayed out of view for several days. Nero  would have let the incident pass, but Montanus apologised. Nero could not then pretend that he had not been involved. Nero responded to the apology, ‘So he knew he was hitting Nero’ and Montanus killed himself (Dio, 61. 9; Tacitus, Annales 13. 25).

The gang visited brothels and bars and made trouble. In a city without a police force, such a group could only be met with violence, and if people knew that it was Nero, then they would avoid intervening.

This was riotous behaviour of rich and powerful boys, but is given meaning by the immorality of Nero’s later behaviour. This hinted at in the stories of the Iuvenalia, but reaches it’s sensationalist height with a festival event held by Nero and his praetorian prefect, Tigellinus, held in 64 (Tacitus, Annales 15.37). The detail is given by Dio (62.15). After a series of games, the emperor held a public banquet. The additional excitement was provided (supposedly) by the prostitution of multiple women in booths erected round the theatre. Women were chosen without respect of status or youth: married women, girls, women of the poor, women of high status. We simply cannot assess the veracity of such stories.

Nero’s own sexual behaviour was unconventional. He supposedly seduced a vestal.  In addition to his multiple marriages, he celebrated two ‘marriages’ to men, Pythagoras and Sporus, the latter being castrated. The open nature of these relationships causes more interest than the fact of the relationships themselves. Romans worried about status issues within homosexual relationships and received Greek ideas about the proper role for a man being to penetrated the object of his affections. But Nero advertised himself as taking both the male (penetrating) and female (penetrated) roles.  Sporus also supposedly went with him to Greece, a royal consort. Other wild stories of Nero’s sexual activities circulated, stories of sadistic sexual attacks on victims while he was wearing animal skins. All these stories suggest that Nero was out of control, a tyrant enslaved by his passions and incapable of ruling himself or an empire (Suetonius, Nero 28–9; 35; Dio, 62. 28.2–3; 63. 13.)

We could look at the behaviours of Nero in the same light as those of other emperors. We could think of him as behaving in the same terroristic way as Gaius, for instance. But even if this was na expression of power, it operated in different ways.

There was the individual display: Nero advertised his homosexual relationships. But who would be impressed by his relationship with Sporus? The sex was in defiance of convention, and it may have been that Nero wanted to shock. But Nero did not share Gaius’ fondness for shocking the more conventional. More likely, the public nature of the relationship was sending a message: Nero could behave in an unconventional manner, but also reinvent the rules of relationships. He was not to be bound by the past and convention, and this made new relationships and new cultural expressions possible. It is no coincidence that Sporus was taken to Greece: there was theatricality to what was being done.

But there was also the group activities. Whatever we make of the orgiastic activities and the veracity of the reports, it seems likely that some level of wildness was involved in these celebrations. What did this do? No doubt it caused some individuals considerable pain. But others were joined together. They could celebrate the absence of rules, the anarchy that Nero offered them. Nero could make this happen. He could sweep away everything and for some create a landscape of pleasure. There is a close relationship between the architectural extravagance and the moral boundary breaking.

After 59, Nero the matricide appears to have decided that those rules did not apply. He could invent new rules. In many ways, Nero ran his regime in opposition to the old order. He offered an empire of culture that looked to other, more Greek models, of imperial power. In the end, of course, the old order triumphed, but if the political situation had not turned against him in the late 60s, it is possible that the Neronian model of what it was to be a Roman might have succeeded.