Home » Nero » The End of the Early Court

The End of the Early Court

The frictions that were visible in the imperial court around the period of the murder of Britannicus continued into the following years. These were mostly visible in trials or accusations.

Trials were important political events because they were launched within the aristocracy. They were political acts. It is not fair to say that guilt or innocence were not relevant (they clearly were), but the court of senators who heard their peers were influenced by political circumstances. A victim of a prosecution could expect sympathy almost whatever he had, or had not done. A prosecutor could expect some hostility: it was an attempt to ruin or even kill someone who inevitability had many friends and probably some family in the senate.

Malicious prosecutions disrupted the senate and the social relationship at the heart of Roman politics. Since evidence was often flimsy (based on the tittle-tattle of who said what to whom or perhaps even who was sleeping with whom), no one could consider themselves safe. And the consequences of a malicious accusation were also huge for those directly affected.

Senators might be quite relaxed about many issues (adultery, corruption, etc.), but they could not afford to be relaxed about anything that touched on the power and dignity of the emperor. If Nero took a personal interest, or was thought to take an interest, defending those accused might be considered an act of opposition. Even if the emperor was taking little an interest,  a prosecution which touched on imperial power was likely to be taken seriously by the senators.

Accusations could also be ways of testing the political climate: was it possible to bring down enemies? In AD 57, Pomponia Graecina, wife of Aulus Plautius, the conqueror of Britain, was accused of ‘foreign superstitions’, whatever these might be. One might suspect that the real issue was that she was a friend of Julia, who had fallen victim to Messalina, though the exact patterns of loyalty and political affiliation are obscure. The case was transferred to a court of the family to be convened by her husband: such procedures were used for non-criminal matters which affected families. Plautius declared her innocent (Tacitus, Annales, 13. 32). Effectively, Plautius successfully resisted the attack on his wife and therefore on himself.

Others were less fortunate. Publius Celer, who had been instrumental in the removal of Silanus was brought to trial for corruption. Nero delayed the trial until he died of natural causes. Cossutianus Capito was condemned for corruption and exiled. Eprius Marcellus successfully defended himself on a similar charge (Tacitus, Annales, 13. 33). The politics behind these trials is obscure, but they suggest conflict in the senate and must have generated suspicion and unease.

The situation gradually worsened, but slowly. In AD 58, an enemy of Seneca, Publius Suilius, was brought to trial and exiled. He had been Messalina’s associate and had conducted some of the notorious prosecutions of that period. His prosecution was thus not a surprise, but it had been delayed and his enemies, of whom there were undoubtedly many, had been restrained. But by AD 58, they got their man. It suggests a gradual worsening of the political situation (Tacitus, Annales 13.43).

But nothing before 62 suggested that the factional rivalries that were besetting the senators were spreading to the emperor and his court. Then, Nero decided to make changes.

He wished to divorce Octavia, but she had her supporters. Burrus seems to have spoken for her (Dio, 62.13). In our narratives, this was the culmination of the long-term planning that had led to the  death of Agrippina. But what are we to make of the gap? Agrippina was killed in March 59. If this was partly so as to remove an obstacle to him marrying Poppaea, then he was remarkably restrained about taking the next step and ridding himself of Octavia.

But in 62, Burrus died of throat cancer, though inevitably there were accusations that his death was assisted (Tacitus, Annales, 14. 51–2).  He was replaced by Faenius Rufus, who was popular with the people and Sofonius Tigellinus. Seneca found himself isolated and begged to retire (Tacitus, Annales 14. 52–6). Now, Nero moved against Octavia.

Octavia was accused of adultery. One of her servants was tortured to exact an accusation of adultery, but she stood firm. 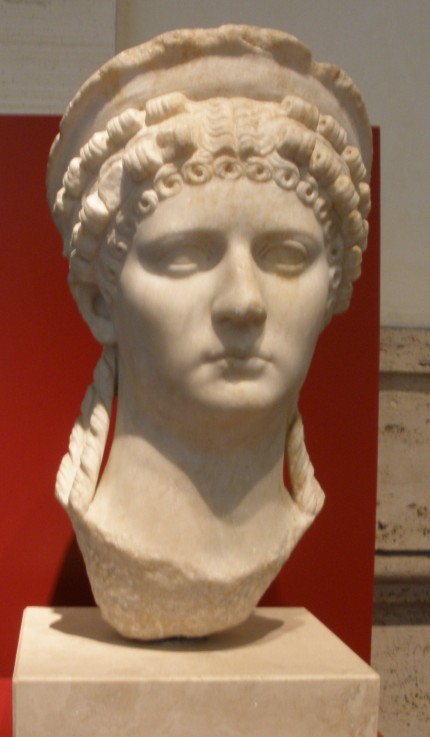 Then Octavia was sent off to Campania. The people asked for her return. Nero acquiesced and statues of Poppaea were overthrown by the crowd. Poppaea is accused by Tacitus of throwing a tantrum. Anicetus, the murderer of Agrippina, was persuaded to confess to adultery and Octavia was packed off to exile and then executed (Tacitus, Annales 14.60-64). She was twenty.

Making Nero an emperor who danced to Poppaea’s tune makes no sense. And how would our sources know what she said the to the emperor. But to make these acts a feminine rivalry both devalues Nero and turns the politics into sexual jealousies.

Nero was changing course. Agrippina, Burrus, and Seneca were gone. Octavia was a tie to Claudius and to the system of familial alliances that Claudius had called into being. Nero no longer needed them. He could act alone and in a new style. Poppaea potentially strengthened his position: she could give him children. He no longer needed to be so conciliatory, and this we see almost immediately.  Faustus Cornelius Sulla Felix (who had been exiled for conspiracy in 58) was assassinated and his head brought back to Rome. Second, it was decided to kill Plautus, who had been exiled to Asia. Plautius was forewarned and advised to call upon friends and enter rebellion, but did nothing. A centurion killed him (Tacitus, Annales 14.57-59).

Nero was showing strength. His action was not that of a weak emperor ruled by his mistress, but of a strong emperor, reshaping his court.

One of the stranger elements of the story is the demonstration of the people in favour of Octavia. It reminds us that this was not just a blood-soaked family saga. The people cared. They had a stake in what happened. It is very difficult to understand why.