Much of the success of Nero’s early years is attributed to Seneca and Burrus. This is consistent with ancient standards of historiography. For our ancient sources, Nero’s early success could not be of Nero’s own doing, but rather was a feature of the competent management of Nero by those around him (Tacitus, Annales 13. 2). There may have been a largely lost historical tradition that lauded Seneca and saw him as a philosophical martyr to Nero’s tyranny, glorifying the years of his influence as if they represented rule by a philosopher-king.

Yet, the emergence of Seneca and Burrus as leading figures was in itself part of a gradual eclipsing of Agrippina in spite of the fact that both owed their positions to her. Nero’s speeches were, according to Tacitus (Annales 13. 2–3) drafted by Seneca. The positioning of the regime was complex, deriving prestige and legitimacy from Claudius, but wanting to distance itself from the politics of the Claudian regime. Seneca helped that line be walked.

By the time of Nero’s accession, the Principate had been functioning for nearly a century. Generations of senators had managed their careers under the monarchies of Augustus, Tiberius, Gaius and Claudius, with all the difficulties that beset those regimes. What is obvious, and is so evidently dramatised in Tiberius’ accession debate, is that the political elite engaged in doublespeak.   Doublespeak emerged as a concept to characterise the way in which totalitarian regimes use language from George Orwell’s 1984: ‘War is peace. Freedom is slavery. Ignorance is strength’.

Regimes say one thing, but mean its opposite: ‘We must bring peace’ means ‘We must invade’. Nero’s praise of Claudius was doublespeak, reflecting his contempt. For doublespeak to work the audience must decode it. Nero could praise Claudius, but in so doing could mark a break with Claudius. But the skill is not limited to regimes. A senator could praise an emperor, but what the senator really thought or intended others to think was not clear, and deliberately so.

By playing on the doublespeak of contemporary political culture, Nero asserted his understanding of the realities of political power: he signalled that he knew the game that was played. Praise for the emperor was fake. The emperor received that praise knowing it was fake and gave fake thanks those who praised him. It was a ritual, and he knew how to play it.

The guarantors of that sophistication were Seneca and Burrus, consummate courtiers. They could manage the business, stroke the egos, play the court. At one level, the Neronian court was about appearances. Seneca and Burrus guaranteed that the political game would be played properly.

If everyone adhered to the rules, it would turn out well.

Nero appears to have tried to win over the senate in his first years. He allowed them considerable freedom and they responded with a legislation on whether those prosecuting or defending should receive a fee (the Roman elite thought that you should act in court our of principle, not pecuniary advantage), and whether the praetors should have to pay for games to be held. This was relatively minor stuff, but importantly it was decided in the senate  (Tacitus, Annales 13. 5). More importantly, Nero was faced with a crisis on the Eastern frontier, which brought an Armenian delegation to Rome and led to a Parthian intervention in Armenia. This posed problems for Nero. Major campaigns had previously been conducted by members of the imperial family (Germanicus, for instance) or the emperor himself (Gaius in Germany; Claudius in Britain). But could Nero himself go to fight a long war on the Eastern frontier? Instead, he selected Domitius Corbulo as his general. Trusting a senator to such an important position was a gesture of confidence, a confidence that collapsed as the reign collapsed. But in 54, this was an important statement. 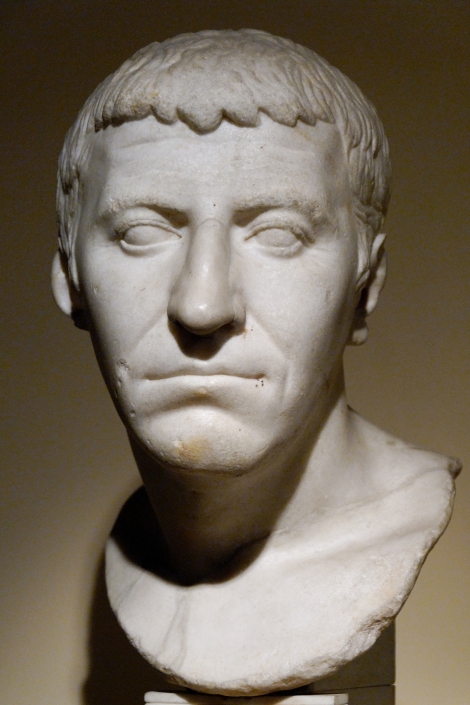 Portrait probably not of Corbulo, but once thought to be of Corbulo (Musei Capitolini Creative Common)

Nero’s reaction to the Armenia conflict sparked a panoply of honours: playing the game, the senators honoured Nero before he had achieved anything as a sign of loyalty (Tacitus, Annales 13.8).

But Nero also made a display of rejecting honours, such as statues in gold and silver. He stopped a proposal to change the first day of the year from 1st January to 1st December, Nero’s birthday (Tacitus, Annales 13. 10).

A senator and an equestrian who were accused of supporting Britannicus were not prosecuted. A friend of Messalina was recalled from exile and Nero/Seneca spoke on the virtue of clemency (Tacitus, Annales 13.10-11). What was being played out was symbolic: Nero was making a claim to be trusted, that his power would be execised within limits, that his leadership would be powerful, but moral. And the senators were asserting their loyalty.

But there was instability. In 55, Nero poisoned Britannicus. He was killed at the  emperor’s own table with a poison so strong it left marks on his body.  Britannicus was always a potential threat. His survival always depended on whether there was any chance of that potential being realised (Suetonius, Nero 33; Tacitus, Annales 13. 14–17; Dio, 61. 7.4). Tacitus attributes the death to an increasing conflict between Agrippina and Nero. The careful pattern of familial alliances established by Agrippina were thereby broken down and one can see that Britannicus and his fate might have a point of contention in the imperial court. The unsubtle removal of the prince was hardly a matter a chance: it was an exercise of brutal power by Nero, a sign that he was more than capable of removing his enemies.

Few can have been shocked by Britannicus’ death. Would any risk their lives to avenge a dead emperor’s dead son?

But there was no resumption of the legalised violence that had marked so many of the prior reigns. Tacitus records accusations against Agrippina, a Rubellius Plautus, Faustus Cornelius Sulla Felix and Burrus (Tacitus Annales, 13. 19–23) and Dio records an accusation against Seneca and Agrippina (Dio, 61. 10). The accusations came to nothing, rebounding to the distress of the accusers. But the very fact that there were some prepared to try such dangerous courses suggests that the divisions in the imperial court were obvious and the regime unstable.

Nevertheless, the senators grew in confidence and in political engagement.  The senators debated the behaviour of freedmen and whether their patrons (their previous owners) should be able to revoke the grants of freedom (Tacitus, Annales 13. 26-27). There was a disagreement between a praetor and tribune that recalled in some small way the political divisions of the Republic. It resulted in various small administrative adjustments in the role of various magistrates, partly in an attempt to preserve the power of the traditionally more important positions and to ensure that business was conducted openly (Tacitus, Annales, 13. 28-29). In AD 57, the senate made freedmen residing with their patron liable for the death penalty if their former master was murdered by slaves (Tacitus, Annales 13.32). And in AD 58, Cassius Longinus amended a proposal concerning the celebrations for Nero’s early successes in Armenia by noting that there was a danger that no work would be done in Rome (Tacitus, Annales 13. 41). This reticence did not disgrace and Cassius was sent as a senatorial representative to sort out feuding in the Campanian town of Puteoli. He was apparently too strict and two brothers, P. Sulpicius Scribonianus Proculus and P. Sulpicius Scribonianus Rufus, were sent to replace him. They brought soldiers and that brought the town to order (Tacitus, Annales 13. 48). Thrasea Paetus attacked the over-indulgence of Syracuse in applying to stage more sets of games than were currently allowed (Tacitus, Annales 13. 49).

These incidents have little importance in themselves, but what they show are the senators acting for themselves, expressing political views, and taking decisions. They suggest a different approach from that of the reign of Claudius certainly, but perhaps also from other reigns.

But at the same time, the imperial court was unravelling and the implications of the changes in the Neronian regime were to be felt throughout Roman political life.