It is not clear when Augustus developed a plan for succession. But the question is an important one. He himself owed much to his adoption by Julius Caesar. He repeatedly referenced that link by calling himself divi filius (son of the deified [Caesar]) and including imagery on his coins and elsewhere that referenced the comet (star) that supposedly appeared to mark Caesar’s elevation to divine status.

Coin of Augustus showing him (left) as Divi filius, and (right) as wreathed and with the sidus iulium (British Museum)

But if we ask what he inherited from Caesar and, indeed, what he was to bequeath to a potential heir, the question becomes more complicated. Julius Caesar and Augustus based their legal authority in magisterial power (imperium). But magisterial power could not, by its very nature, by inherited. To inherit power was the mark of a monarchic regime.

After Caesar’s assassination, Mark Antony, as consul and a leading general, came to represent the interests of those who identified with Caesar’s legacy. Importantly, there was no automatic assumption that those who had been loyal to Julius Caesar would support either Antony or Octavian. Indeed, it was circumstances after the assassination, notably the distrust of the assassins and their political associates and concern over the future of Caesar’s land distributions, that led to the formation of a Caesarian ‘party’ at all.

What Octavian inherited initially was little more than a name and a claim on Caesar’s private wealth. Yet, with the formation of a Caesarian ‘interest’ in late 44, that inheritance became a claim on political power. This was in large part because Caesar’s soldiers and veterans needed someone to stand up for their interests. The question that faced those soldiers and veterans was whether those interests were best represented by the young Octavian or by Antony.

Octavian stressed monarchic elements in his relations with Caesar. Caesar had built a forum in the centre of Rome.

The centrepiece of the Forum was the Temple of Venus Genetrix. This was a temple to Venus as Mother of the Roman nation, but also as the mother of Aeneas, who in one version of the mythical origins of Rome, was the father of Iulus, the first Julius.

The Forum laid some claim to Caesar being more than a magistrate. He was in some unclear and uncertain  way related to the mythical past and in some sense his hegemony might have been taken as a reenactment of that past and so rather less extraordinary and outside the traditions of Rome than it might, at first, have seemed.

One might imagine that many contemporaries would have been deeply sceptical, but even if the associations were never turned into an explicit claim on political power, Caesar must have perceived some political advantage in making those claims. Such monarchic remaking of myth suggests that for some at least a new king for Rome was a prospect that would have been welcomed.

It is this perhaps incoherent or not terribly well-thought out monarchism that inspired the deification of Caesar.

It suited the triumvirs to proclaim Caesar’s divinity. It made the crimes of the assassins all the more wicked and justified their repressive measures against those whom the triumvirs saw as their enemies. Not only were those men the enemies of the triumvirs, but they were the enemies of Rome and of the deified Caesar. Religion reinforced politics.

The construction of the Temple of the Divus Julius in a dominant position in the Roman Forum was an aggressive assertion of that message.The Forum was the political and religious (along with the Capitolium) heart of Rome. Caesar and his legacy was to be at the centre of that so important space.

Can we understand the development of the cult of Caesar as being monarchic? 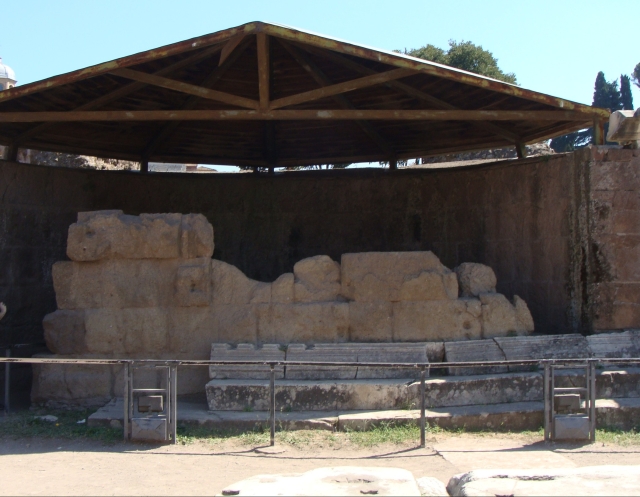 The Remains of the Temple of the Divus Julius

The main beneficiary of this elevation of Caesar would appear to have been Octavian. He laid consistent claim to an association with his uncle and adoptive father. We must understand such claims as bringing him an elevated status (since otherwise he would never have not have made his status as divi filius so prominent). Yet, it was not a direct claim on power.

We tend to think about governmental and political power primarily through a legal framework (based on ideas of sovereignty). But the Romans had a more complicated understanding of power that included legal powers and influence.

From his earliest emergence on the political scene, Octavian’s legal power was always magisterial and granted through the processes of law. And, like all other magistrates, that power was granted to that he could do a job. After Actium, Augustus’ position remained a combination of powers that were granted to him by people and senate. Those powers emerged from the triumvirate and were given more focus by the reforms of 27 BC, 23 BC, and 19 BC. 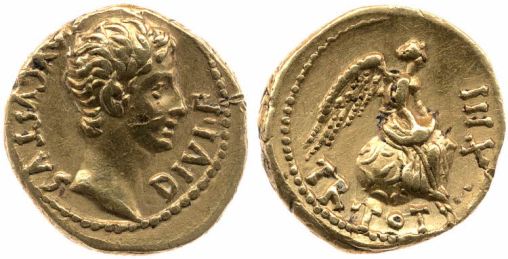 Those formal and legal powers co-existed with powers of influence. So on one coin we can see that Augustus advertises his legal power of the tribune. But the images, which associate him with Caesar and a winged Victory, show influential power.

In fact, although tribunician power has the greatest prominence in his legal titles as reflected on his coinage it is the title of imperator that is most often referenced. Imperator was a title bestowed by the troops by acclamation after a victory. It was then confirmed by the senate. It brought no formal powers, but recognised military achievements secured through his imperium.

The title imperator was personal. Many Roman generals had been recipients of the title over the generations and although a family’s prestige was enhanced by having an imperator in the family, and there was political benefit in that, it could not in itself be inherited.

The problem of legal power and influential power is exactly the same. Both sorts of power were personal. They could not be inherited. Yet, it is evident that in one way or another, they could.

There is no reason to believe that Roman political thinking was any more logical coherent or systematic than ours. In terms of political system, it is clear that power was associated with an individual and could not be passed to his heirs. Yet, Rome was an aristocratic culture. The sons of successful aristocrats often rose through the political system. They may have convinced themselves and, indeed, others that this was because of their talent and merit and nothing to do with Daddy’s or Mummy’s wealth and connections. But that’s a lie aristocracies everywhere have spun for millennia.

It meant something that Octavian was the adopted son of Julius Caesar. It became increasingly clear that it meant something to be married to Julia, Augustus’ daughter. The dynastic manoeuvres that made possession of Julia’s marital bed the sign of future imperial glory make that clear. The popular sorrow at the deaths of heirs and the attitudes taken towards imperial successors (notably Gaius and Lucius), manifest political values which we would see as monarchic.  It was important that  Tiberius, whatever his other claims for the imperial position were, was adopted by Augustus.

The issue of succession made clear the twin nature of Augustan rule. It was based in legal and influential power as was traditional in Rome. It was also based in family. It was thus both Republican and Monarchic.