Issues of succession emerged in 23 BC when Augustus was gravely ill. The choice was between the experienced Marcus Agrippa and Augustus’s nephew Claudius Marcellus. Augustus chose Agrippa, it seems. We cannot know whether a clash between two potential successors in 23 BC is any more than the fevered imaginative interpretations of later writers, working with the expectation that a relative would always succeed when one is available. 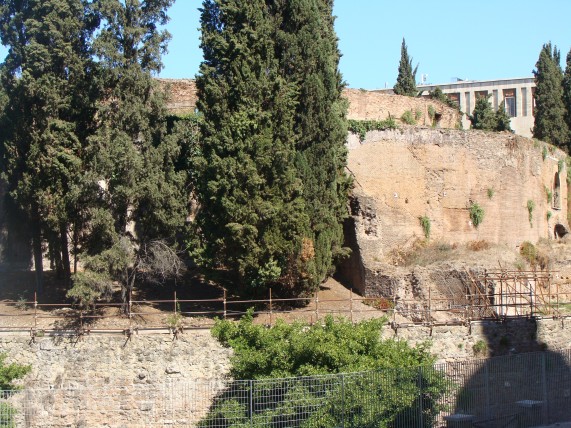 Mausoleum of Augustus (or the Augustan Family)

The death of Marcellus ended any competition, real or imagined. But the public demonstrations of mourning and the ceremonies around the interment of Marcellus’ ashes in the Mausoleum of Augustus, and the honours granted to the late youth show  a markedly monarchic political culture.

Whereas the Mausoleum could have been see before this point as a measure of Octavian-Augustus’ public commitment to Rome, perhaps in contrast to Antony’s desire to be buried with Cleopatra, from 23 BC, it was a family tomb, acknowledging the predominant status of a family in Rome.

Marcellus was the son of Octavia, sister of Augustus. He was the closest male relative to Augustus and in a similar relationship to him as the young Octavius had been to Julius Caesar. His marriage to Julia, when she was 13 or 14 and he was 16 or 17 was clearly dynastic. It was a very early age to be married for a Roman man. Roman women did marry very young, but this was probably the earliest possible moment for Julia to find herself in a marital bed. The hurry must reflect an overwhelming dynastic concern to make the marriage.

It created a union between Augustus’ only child and his closest male relative. In the terms of a normal family, this would have been a perfectly normal alliance so as to ensure that property remained within the family and the familial status was retained (for issues around marriage see The Roman Family: Basics). In this instance, it also marked out Claudius Marcellus as potential heir to the political legacy of his uncle. It is this dynastic arrangement that makes it remarkable that Agrippa was then chosen as heir. That choice in itself recognised that what was being bequeathed to the heir was not normal or straightforward. A man of Marcellus’ age could not be expected to take it on. It needed someone like Agrippa.

Agrippa was also married into the family. He was married to Marcellus’ sister, Claudia Marcella. His daughter by an earlier marriage, Vipsania, was married to Tiberius, the son of Livia. It is difficult to imagine that this was not policy. The loose dynastic ends of the family were tied in to each other, binding the family ever closer together. Notably, these key allies and family members were not married ‘out’ to widen the circle of allies and connections. What was important was to reinforce the position of those in the family and bind them ever closer together.

But there was more going on than just political marriages. Indeed, we may wonder which way round we should read the issue. Were these alliances designed to consolidate the political power which had familial implications or alliances designed to cement the family’s coherence which had political implications? Family and politics has become inextricably linked so that to be a family member was to be a political figure. To make it as a serious political figure, one needed to become a family member.

But even the familial arrangements were hierarchic, or became so. It looks as though Tiberius, Drusus and Agrippa were one step removed from the familial centre, supports to the central relationship which was Augustus, Julia and Marcellus. Livia‘s position in the early stages of the family’s development is obscure; it is later that we see her as an important figure.

The ‘post’ of husband to Julia was, then, of considerable importance to the dynastic politics of the family. Augustus did not fill the ‘post’ immediately. It was in 21, perhaps two years after Marcellus’ death that Augustus turned to his closest associate, Agrippa (Dio, 54.6). Julia was probably 18 and now on her second husband. Agrippa was 42 and she was his third wife.

The final decision appears to have been taken not for domestic reasons, but for political. There was trouble in Rome. Augustus himself was in Sicily preparing to go East. He needed someone to shore support in the city and assert the regime’s authority. Agrippa was the obvious and experienced choice and he was sent to the city. His marriage to Augustus’ only daughter consolidated his position and marked him yet more obviously as Augustus’ heir and gave the family more solidity. It now had two leading men on whom it could rely.

One may wonder whether the gap (Romans expected young widows to marry again quickly and even legislated to encourage it) signified a moment of indecision. Were there other candidates, perhaps candidates from better families than Agrippa? Dio, 54.6 has a story related to the marriage in which Augustus asks Maecenas what to do with Agrippa. Maecenas advised raising him still further or killing him . It sound fictional, but it is in the context of who will marry Julia and thus is arguably about who will be heir designate to Augustus. In that debate, it is arguable that giving Julia to anyone other than Agrippa would establish competing centres of power within the the imperial family. To avoid this, Maecenas offered Augustus what was probably a correct analysis. Once within the imperial family, Agrippa could continue to be honoured alongside the other family members. The marriage proved fruitful. Agrippa and Julia had Gaius Caesar (20 BC), Julia (19 BC), Lucius (17 BC), Agrippina (14 BC), and Agrippa (12 BC). Augustus adopted Gaius and Lucius and, to judge by her name, Julia. By so doing, he marked the boys as his heirs. 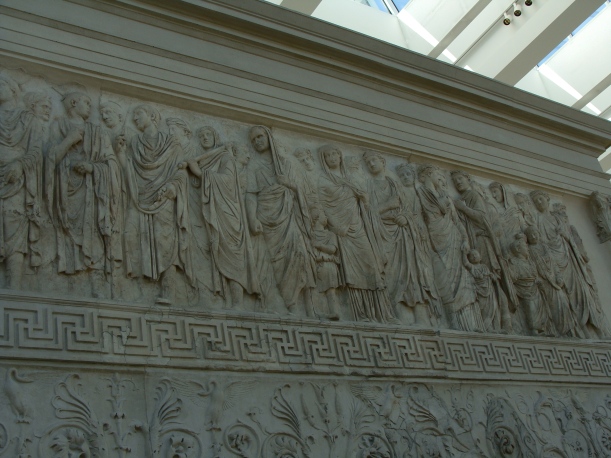 The Augustan Family on the Ara Pacis

The imperial position had, to a considerable extent, become a corporate venture. Legally, it remained a magisterial position, associated with powers granted to Augustus and Agrippa. But in terms of the imperial image, it was a family matter.We can see that in the imperial cult, in the prominence of the family at such events as the secular games, in the increasing and extraordinary prominence of Livia (a Roman woman!) in imperial imagery, and the first portrayal of a family on a public monument, the Ara Pacis (virtual tour).

Agrippa died in 12 BC. Augustus lost his closest associate. He had been his leading general for three decades. He was also at the centre of the dynasty. His death raised some of the same issues that had followed from the death of Marcellus. But rather than a paucity of heirs, there was now potentially a surplus. Gaius and Lucius were evidently too young to take a responsible political position. For the immediate needs of the dynasty, Augustus a powerful adult male deputy.

And he had two options: the sons of his wife, Livia. Tiberius was born in 42 BC and (Nero Claudius) Drusus was born in 38 BC, just before their mother married Augustus. These two had been given major military roles in the Augustan expansion in the West and were to continue to fulfil Agrippa’s role in leading Rome’s armies. This emphasis on military experience shows how important politically imperial success continued to be. 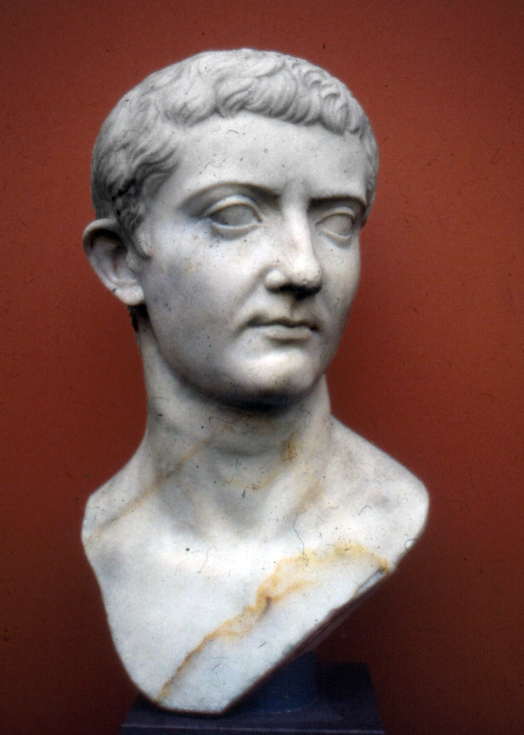 Augustus advanced Tiberius and Drusus together. They were allowed to hold offices early as part of the arrangements in 19 BC (Dio, 54.10). They represented Augustus in Rome in 16 BC, presiding over games (Dio, 54.19). They campaigned in Germany and in the Danubian provinces before Tiberius became consul in 13 BC. 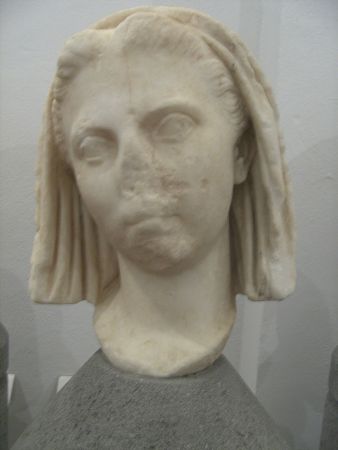 With the need to reorder the family after Agrippa’s death, it was Vipsania who was divorced. Tiberius married Julia in 11 BC (Dio, 54.35).  Tiberius thus assumed the ‘post’ of husband to Julia, whose marital bed was once more the focus of imperial ambition.

Yet, Tiberius and Drusus continued to be treated as a pair. Their careers progressed in parallel. Drusus was consul in 9 BC. But he died from an illness contracted while on campaign  (Dio, 55.1-2).

Drusus’ death was the cause of much displayed grief. Honours were voted to Livia and Tiberius took a central part in the ceremonies. He continued to honour Drusus in his death and in 7 BC rebuilt the Republican temple to Concord and inscribed his and Drusus’ names on it. A temple which had been designed to draw a line under political strife in the city thereby became a monument to the togetherness of two brothers at the heart of the imperial family (Dio, 55.8).

Yet, their remained the same fundamental tension between dynasty and political capacity. Tiberius had become an Agrippan figure, central to the everyday operation of imperial power, but set against the two eldest sons of his wife. In 6 BC, Augustus granted Tiberius tribunician power (Dio, 55.9).  He was 35 and without doubt the second man of state. But at that moment the contradictions in the imperial regime came to the surface and the the regime went into crisis.