When we talk of the Augustan Age or think of the social and political transformations of the period 30 BC – AD 14, there is a tendency to emphasise the role of Augustus. It is a tendency that is picked up from our sources, such as Suetonius and Cassius Dio, and even from contemporary poets. Everyone concentrates on the ‘Great Man’.

This is an approach deeply embedded in the way in which Roman history especially is written about and consequently has been taught.

What are the potential consequences of such an approach?

At its worst, such approach make history the story of Great Men. It is Great Men who seem to make the decision that change lives and histories. History becomes the biography of individual, even a function of individual psychology. Journalists love this sort of history: obsessed with personality they ignore the deeper factors involved in social and historical change and tie it, so often, to personality.

Why is that a bad idea?

If we concentrate on the idea of the Great Man, so many other ways of thinking about history simply get forgotten.

We can critique any approach by asking key questions.

The answers you come to will allow you to ask and answer the further question?

We should be aware of the political and ethical consequences of adhering to Great Man history. These include:

Romans emphasised the individual contribution to historical development. They honoured and remembered the traditions and achievements of their ancestors. But those individuals were always seen as part of a collective, operating with and alongside friends, colleagues, and juniors, who aided them in what they achieved. An individual’s triumph was a profoundly social achievement.

The lone genius who works against convention was, for them, dangerously close to be a sociopath. Emperors such as Gaius , who are depicted as taking decisions with consultation and arbitrarily, are seen as insane.

Romans took decisions collectively. The more important a person was, the more weighty the advice he would seek. A Roman magistrate would, normally, consult advisers, who were friends (amici) and (male) family before making any serious decision.  The 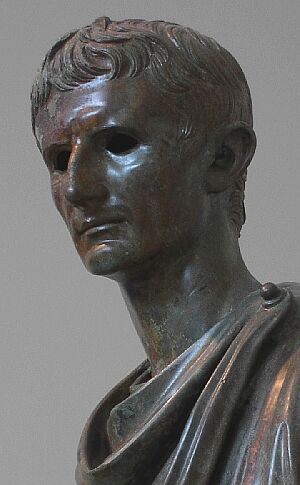 Roman pater was the head of the family, but the pater would normally take advice (from both the men and women close to him) before making important family decisions. This increased the chance of a decision achieving consensus.

Romans knew where power lay in the making of any decision (with the person who held potestas or imperium [both words to be translated as ‘power’]), but that power was exercised after taking advice. The senate, after all, was an advisory body for the magistrates. The auctoritas on which Augustus prided himself was the weight given to his advice. In the Republic, it would be a brave person who ignored senatorial advice. Any senior Roman who did so might be thought to be threatening the Roman political order. Anyone who ignored Augustus would be in serious trouble.

Roman politics operated largely through networks. These were networks of ‘friends’ (amici). The amici  of a major figure had their own amici and in this way a certain amount of influence was dispersed through a social network. Such friends were bound to each other socially and politically. The networks were personal and could break up on the death of  a lead figure, as we see on the death of Caesar. The amici of Caesar were not necessarily amici of Antony or Octavian.

Consequently, even if we write or read history as the story of individuals, if it was the statues of individuals that adorned Roman cities, if generals parade through streets of Rome as conquering heroes, an individual was also the lead in a team.

Who was in the Augustan team?

When Octavian appeared on the Roman political scene, he was too young to have built an extensive network of loyal friends. One consequence was that he relied on more experienced figures, such as Cicero, to gain access to powerful figures .

But there were figures close to him from the beginning. These included Marcus Vipsanius Agrippa and Gaius Cilnius Maecenas. Dio gives these two an extraordinary prominence in his narrative by making them the protagonists in a debate, which fills almost a whole book, as to the direction in which Octavian should take the state in 29 BC. The debate is clearly fictional, but the process of talking through the next moves and planning with his friends was almost certainly factual.

There were others close to Augustus in this period. These were men such as Terentius Varro, Asinius Pollio, Valerius Corvinus, Statilius Taurus, Junius Silanus, Norbanus Flaccus, Lucius Cornificius, Lucius Vinicius, Calpurnius Piso, Sextus Appuleius, Licinius Crassus, Lucius Arruntius, and Marcus Lollius. Some of these were from established families (notably Corvinus, Silanus, Crassus, and Piso), but others were newcomers on the Roman political scene (Agrippa, Maecenas, Taurus, Pollio, Vinicius, Appuleius, Arruntius, Lollius). The number of men coming from families which were not previously distinguished led the influential Roman historian Ronald Syme to argue for an ‘Augustan aristocracy’, a group of insurgent political leaders.

Some of these men married into the family. Family was always part of the inner circle and we should probably include the women in that circle, especially Julia and Livia who were seen as legitimately influencing Augustus.

If power rested with Augustus, as it undoubtedly did, he was far from alone. He was at the centre of a group. The ideas and ideologies and the practices and policies of the Augustan emerged from that group. They were not a political party: their ties were far more intimate than that. The closeness of ties of friendship can work well within political situations, establishing firm and long-lasting relationship and stable political bonds. That is, until they breakdown, when consequences are likely to be more serious and bitter.

But the grouping around Octavian-Augustus was strong and the interests of these powerful men were closely tied together. If Octavian had died in 23 BC, it seems unlikely that they would have allowed his legacy to devolve. Their interests would have encouraged them to work together to maintain their control over the Roman state. The individual was useful, but did it really matter who he was?