Home » Augustus » Agrippa before 30 BC

In Roman political culture, where you came from mattered. It mattered in part because of the processes of Roman politics. To rise up, one needed to be elected to junior posts. When one stood next to other identically dressed young men as the people turned up to vote, they needed to know who you were and whether to trust you. They had almost no information on which to make that judgement other than to whom you were connected , to whom you would turn for help and support, and, perhaps, when and where you had had military experience.

We know almost nothing about Agrippa’s family. The burst onto the Roman political scene with Agrippa. In Roman terms, he came from nowhere.

With Octavian in the Civil Wars

He was probably about Octavian’s age, born c. 63 BC. He likely served with Caesar as a military officer. We first come across him with Octavian in Apollonia in 44 BC. Suetonius (Augustus 94) has a story of the two young men visiting the foremost astrologer of the day, Theogenes. Agrippa went first and was predicted a brilliant future. Octavian was supposedly reluctant to give his place, date and time of birth. When he did, Theogenes fell at his feet.  One might imagine, cynically I know, that Theogenes knew that there was little money or fame in predicting mediocrity for Caesar’s nephew and his friend, but a prediction of a glorious future might pay handsomely.

Also at Apollonia was Salvidiendus Rufus, who was to go on to have a brief but brilliant military career as admiral of Octavian’s fleets and then as a commander in the turmoil of 40 BC when his six legions were deployed to support Octavian’s forces in Northern Italy. But one of the must surprising results of the Perusine war was that Rufus was accused of treachery and killed by Octavian. After that point, Agrippa was without question Octavian’s leading general.

It is unclear whether Rufus and Agrippa and whoever else were with him because they were already friends or that the less distinguished had been asked by Caesar to go. They were accompanied by troops, probably to provide the young men with some military training. Caesar’s nephew was a useful friend to have and officers from nearby garrisons visited. So in March 44, there was already a link to the army.

When news broke of Caesar’s murder, Octavian did what all good Romans did. He asked his friends what to do. Some, probably Rufus and Agrippa, said he should join the army in Macedonia and prepare to lead them to Rome. Centurions had come  to offer their services. But his mother and her husband (not Octavian’s father) urged caution. He followed the advice of his elders and headed to Italy without troops. When news came that he was named Caesar’s heir, he chose to contend politically rather than militarily for the time being (Dio, 45.3; Appian, Civil Wars 3.9-11;  Velleius Paterculus, 2.59).

Agrippa was by 41 working alongside Salvidienus Rufus in the early stages of the campaign against Sextus Pompeius (Dio, 48.20). He may have been ‘in charge’ in Rome in the absence of Octavian. Certainly, he was presiding at games. He took a prominent role in the Perusine War, commanding one of Octavian’s armies (Appian, Civil Wars 5.31-35) by preventing Antonian forces relieving the siege of Perusia, and then led armies against southern Italy against Antony and Pompeius in the run-up to the peace of Brundisium (Appian, Civil Wars 5. 56-58).

The reward for his efforts was a consulship in 37 BC. Roman were not expected to take the consulship before the age of 41 and so this was an extraordinary honour made all the more notable by his lack of famous ancestors. He was then sent on campaign to Gaul before being summoned back to Italy to lead the war against Pompeius, which was going disastrously wrong  (Dio, 48.49-50; Appian, Civil Wars 5. 92). After he and Octavian defeated Pompeius (Dio, 49.1-10; Appian, Civil Wars 5. 101-122), Agrippa was honoured with a special golden crown (Dio, 49.13). He was almost immediately sent to campaign in Dalmatia, before returning to Rome in 34 (Dio, 49. 38).

In 34, while Antony was performing the Donations of Alexandria, the people of Rome were celebrating a festival of Venus Genetrix, a goddess associated with Caesar and the Julian family. It was likely an opportunity to celebrate Octavian. 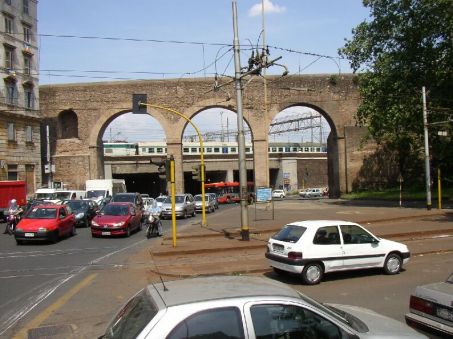 In the same year, Agrippa opened the repaired Aqua Marcia (Dio, 49.41). In so doing, he increased the water supply to the city. Aqueducts not only looked spectacular in the countryside and were formidable feats of engineering, but were likely extremely expensive. The provision of water (which we tend to take for granted) was a material means by which the lives of poorer members of society could be dramatically improved.

In 33, he became aedile. He had been consul in 37 and it was unusual for Roman politicians to undertake lesser positions after holding the top job. The aedile had responsibility for the fabric of the city and in that capacity Agrippa advanced a programme of urban renewal.

Some of these activities were necessary, but lacked glamour. Other activities were dramatic shows of generosity. The beneficiaries were the poor of Rome. Water, oil, salt, a decent shave or hair cut, access to the baths, food, money, shows, and protection from floods mark out a concern with the people. Agrippa and Octavian were demonstrating their loyalty to and support of the people of Rome.

In the rapid flow of events of these years, it is easy to forget how little we know. Agrippa’s success are often recounted by our sources in a sentence, but that sentence condenses often a year or more of strenuous activity. By 32, Agrippa had been at Octavian’s side for eleven years (at least). He was a vastly experience general with a record of brilliant success on land and sea. Politically, we know little about his day-to-day activities, but he had been consul, acted seemingly as Octavian’s deputy in Rome, and was responsible for reinforcing the regime’s relationship with the plebs. The man without a family was at the centre of political power in Rome. He was to lead Octavian’s fleet at Actium and to be at his side in the complex political negotiations that were to follow.