The Fall of Lepidus

At the end of the war in Sicily, many of Pompeius’ troops had defected to Lepidus. This gave him a limited military superiority to Octavian. Lepidus had lost out when Pompeius had been incorporated after the peace of Brundisium. History has tended to see Lepidus as the third party in the triumviral relationship, a sort of balancing act between Octavian and Antony. Indeed, much of the literature concentrates on Octavian and Antony. It is these two who were of interest to the later traditions. In this case, it seems possible that there is truth in the tradition.

Lepidus’ reputation has suffered in part because of the decidedly inglorious way in which he entered the triumviral alliance. After the battles of Mutina, Antony had retreated north, away from the consular armies and Octavian. He had been reinforced by his trusted ally Ventidius, but still continued his retreat into Southern Gaul.

Antony’s retreat was to join with the legions of Gaul and Spain, which were gradually and very slowly gathering in south Gaul.

Why were they amassing so slowly?

Civil war was a risky business. The benefits were obvious, the risks immense. We should not also discount the probability that many Roman leaders did not want to engage in such a war.

Did they have a stake in the outcome? Most of the key generals were friends of Julius Caesar and had served with him. But Caesar was dead. They owed loyalty to neither Octavian nor Antony. They also may have had friends among the assassins. Which way would they jump?

The issue of what the troops thought was given less prominence than one might have expected. The legions moved under command. They did not rally to the Caesarian cause. Some of the serving troops knew Antony.

But they did not immediately revolt from their general (Munatius Plancus) who had pledged his support to Cicero. But the troops did grumble.

Lepidus delayed and delayed committing, presumably hoping that someone would make the decision for him. His and Antony’s armies closed. He had assured Cicero that he would fight Antony.

His troops were not so sure. Lepidus woke one morning to find Antony in his camp, chatting with his troops. Lepidus was at his mercy and Antony extended it, perhaps as a message to others reluctant to join his cause. Lepidus was saved by Antony’s desire to show his clemency. Lepidus’ troops had no wish to fight and die in the war. Joining Antony meant that they were likely on the winning side.

In the aftermath of the union of Antony and Lepidus, Lepidus was instrumental in the negotiations between Antony and Octavian. His reward was a place among the triumvirs.

With the defeat of Pompeius, Lepidus was in a powerful position. His troops controlled the East of the island. His control of Africa brought him considerable resources and an army. The Pompeian troops had little expectation of a warm welcome from Octavian, but Lepidus might reward them. Octavian had Italy, but in the immediate context, Lepidus was at least as strong. Octavian tried to appeal to the troops, but his men were driven away. Lepidus had expectations that Octavian would need to settle. 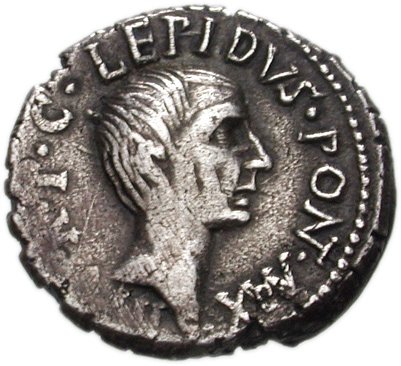 But history repeated itself. His troops made the decision overnight. Would they fight Octavian for Lepidus? What was in their long-term benefit? Would they win? Lepidus woke to find Octavian in his camp.

Octavian was unusually merciful. Part of the settlement of 43 had been to allow Lepidus to become the leading priest in Rome, the Pontifex Maximus. Octavian allowed him his life. He allowed him  to retain his priesthood (which was for life). He may later have regretted this since Lepidus was to occupy the post until 13 BC.  Thereafter, Octavian treated Lepidus with contempt and Lepidus avoided involvement with politics in Rome.

The Roman world was divided between the two, rather than three men.  Octavian came to control the West and Antony the East.

The episodes show the soldiers calculating their interests. They did not blindly follow their generals. Their key decision was whether they would come out of the conflict alive. They also needed to calculate their material advantage. Who would support them? On whom could they rely? There was no ideological decision to be made. There was no great principle at stake. Generally poor men, who fought for money, secured their future and their lives by making the right decision in these circumstances.