After the tumult of the accession, Claudius needed prestige to convince people that he was capable. Roman political leaders proved themselves through conquest and Claudius, in many ways a traditionalist followed that path.

He had no shortage of possibilities for new conquests (see military policy). In Africa, Suetonius Paulinus was campaigning against the Moors. He won a victory sufficient for the senate to offer Claudius a triumph, which  Claudius declined. He did, though, accept triumphal ornamenta (Dio, 60. 8.6, 9.1–6). There were also campaigns underway in Germany  (Dio, 60. 8.7) and the Eastern frontier was restive throughout Claudius’ reign.

But Claudius chose Britain as his military adventure.

Dio (60.19) mentions a certain Berikos who had been expelled from the island and who appealed to Claudius for help. We know almost nothing about the political arrangements in Britain at the time.

Map of Britain based on Ptolemy’s Geography (Commons)

Some of the small tribal groups had begun to issue coins, probably more as tokens as esteem for the junior elite rather than as a medium of exchange, and these provide us some guidance as to the spheres of influence of the various tribes.

Numismatic evidence from Britain suggests that the period saw an expansion of the generally anti-Roman Catuvellauni at the expense of tribes such as the Atrebates in Sussex. The Dobunni in Gloucestershire may also have been fearful of Catuvellaunian expansionism.

Roman interests were not directly affected by these developments. The Catuvellauni did not pose any significant threat to Roman power or prestige. Although trade may have been a little more difficult for a time, it strains credulity to think that Claudius was concerned with the livelihoods of the Gallic traders active in the Channel. Strabo (5.4), writing a generation earlier, suggested that conquest of Britain would bring no economic benefit.

Coin of the Catuvellauni (From Coin Project)

The draw for Claudius was likely two fold. Britain was exotic. It’s conquest would be a spectacular achievement, bound to impress a Roman audience. The second factor was also a Roman one. In invading Britain, Claudius would be recalling the achievements of the founder of the dynasty, Julius Caesar.

One might think, if one was kindly disposed, that Claudius benefited from the logistical preparations of Gaius. But, as Caesar had discovered, the campaign was likely to pose significant difficulties: there were few cities to sack and it would probably be difficult to requisition food. Supplies would need to be shipped across the channel, and the weather was unpredictable.

The major account of the invasion is in Dio (60.19-21). The first stage established control South the of Thames. Claudius joined Aulus Plautius and his army for a push across the Thames to attack Camulodonum (Colchester). Roman victories on the Medway and on the Thames opened the way to the complete defeat of the Catuvellauni and the Eastern associates, the Trinovantes. It looks as though the Dobunni to the west came ot term quickly, as did the Atrebates in Sussex. Nevertheless, Vespasian, who was a legionary commander on the campaign, supposedly fought thirty battles, including taking the Isle of Wight (Suetonius, Vespasian 4) and, indeed, the enormous hill fort at Maiden Castle outside Dorchester.

Ballista bolt lodged in spine from the graveyard at Maiden Castle

The number of battles suggests  not just hard fighting, but that the British attempted to take advantage of their greater mobility and refused the set-piece battle in which Rome’s heavy infantry would likely have been decisive. Suetonius belittles the achievement: He made one campaign and that of little importance (Claudius 17.1), but that seems grossly unfair and to reflect Claudius’s poor reputation.

The news of Claudius’ victory was transmitted to the senate by his sons-in-law, Gnaeus Pompeius Magnus and Lucius Silanus. His prominent generals were rewarded with political and military decorations. He celebrated a triumph. Arches were erected in Rome and Lugdunum. 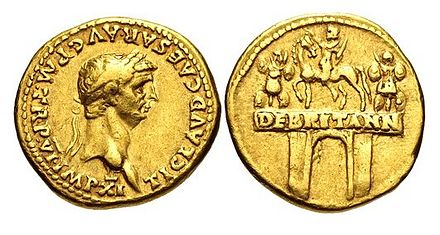 The victory was celebrated on coins. That arch does not survive but fragments excavated in the sixteenth century suggest that had inscriptions to most close members of Claudius’ family (including his daughter, son, mother, and father). Claudius’ son was called Britannicus and Claudius revived an archaic ceremony (previously and typically ‘rediscovered’ by Sulla and Augustus), in which the sacred boundary of the city of Rome (the pomerium) was extended after new territory had been incorporated into the empire (Tacitus, Annales 12. 23-24).

The first stage of the war was completed quickly, but the conquest of Britain was to continue. There appears to have been an anti-Roman alliance in southern Britain led by  Caratacus, the son of Cunobelinos, the chieftain of the Catuvellauni. Eventually, he was driven out of the south and ended up with Cartimandua of the Brigantes. She gave him up to the Romans. Claudius made his arrival in Rome another occasion for celebration, which Caratacus enhanced by behaving as  a proud barbarian warrior rather a slave under threat of his life (Dio, 60. 33.3; Tacitus, Annales 12. 31–40).

There can be little doubt that politically the invasion of Britain was a considerable success. Militarily also the invasion was a difficult operation. Although the British were divided into tribal groupings, there is evidence of significant resistance that required Rome to commit large military forces (4 legions and auxiliaries making perhaps about 50,000 men and perhaps more than 15% of Rome’s military manpower).

Was the invasion justified? I don’t think the Romans even asked that question.