Agrippina, Wife of the Emperor

The preliminaries to the fall of Messalina seem to have taken place in AD 47. In that year, Claudius held the Secular Games. These were games and religious events held to celebrate the ‘end of an age’ which was defined as being the moment at which there were none alive who had been alive at the last performance of the Games. The last Games had been held by Augustus in 17 BC. But Claudius thought that Augustus had miscalculated the period between Games and that a new one was due.

The Games had a religious function, in honouring the dead, but were also political. They were a spectacular, large scale, public festival which was meant to bring together the population of Rome. Augustus had used the Games to celebrate the unity of Rome under his regime. That was probably Claudius’ intent. His position had improved since his accession, but he was likely under few illusions about the fondness with which may of the senators held him.

But something went wrong.

Part of the event was the performance of the lusus Troiae (Trojan games). These were cavalry exercises which were undertaken by young Roman nobles. Lucius Domitius was cheered more than Claudius’ son Britannicus. He was the son of Agrippina and was to become the Emperor Nero. Stories were circulating that snakes had been seen guarding his cradle when he was a baby: the story suggested divine blessing (Nero later claimed that there had never been more than one, surely a Neronian joke) (Tacitus, Annales 11.11). The popular favour shown to Domitius was seen as sympathy for Agrippina, who was thought to be persecuted by Messalina.

Claudius was sensitive to popular opinion. He may have taken note. Rather than pointing just to the success of the regime, the Games also pointed to divisions in the upper echelons of Roman society.

Messalina’s murder left a vacancy in the imperial household. There was no requirement for an emperor to have a wife: Tiberius was unmarried throughout his reign. But marrying was a political act. It bought friends and allies. The Claudian regime was in shock after the fall of Messalina and it needed to shore up aristocratic support.

In Tacitus, Annales 12. 1-8, we get the story of the choice of and wedding to Agrippina. We have an extraordinary amount of detail. Three women were offered up: Lollia Paulina, Aelia Patina, and Julia Agrippina. In itself, that might not surprise: it was a political decision and an emperor would have his pick of the daughters of the most important families in Rome. But the debate was supposedly conducted before Claudius by his freedmen.

An important Roman would consult his friends before making important decisions. Such a debate has an element of the ridiculous about it. Claudius could not choose his own wife. His freedmen competed over the choice. The decisions of state are not taken after rational debate, by the leading men in the state, but in secret conclave by the freedmen.

Why does he choose Agrippina? There were good political reasons, but added to these were what Tacitus calls the ‘inlecebra Agrippinae’. The word suggests seductions. Agrippina is said to visit her uncle frequently and privately and prevail upon him. Once more lust not reason seems to govern Claudius, and once more we have to wonder precisely how we know about these private engagements.

The marriage was clearly a political and dynastic realignment. The most prominent and powerful senator at Claudius’ court was Vitellius, who was censor. 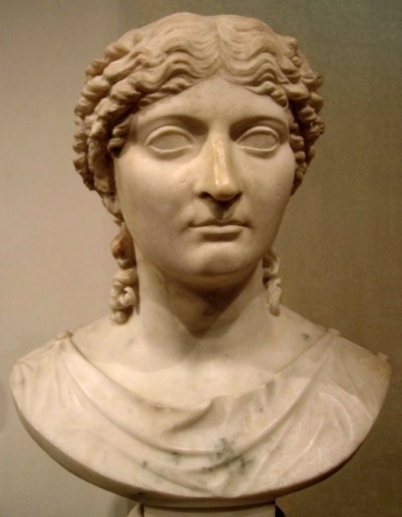 The censorship gave Vitellius the power to supervise the list of senators and to demote anyone thought guilty of immoral behaviour. His son was married to Junia Calvina, who was the sister of Lucius Junius Silanus. Silanus was betrothed to the infant Octavia. Silanus was praetor. On the very last day of his praetorship, he was expelled from the senate by Vitellius. Claudius broke off the engagement to Octavia. The charge, ironically enough, was incest with his sister.

Octavia was now free to be betrothed, in good time, to young Lucius Domitius.

The primary factor operating against the marriage was that it was incestuous. An uncle was not allowed to marry his niece. Vitellius took the matter to the senate. The senators considered the matter carefully passed a decree decided that such a marriage was not incestuous. The problem was solved and the happy couple announced their engagement.

On the day of the wedding, Silanus killed himself. His sister was sent into exile.